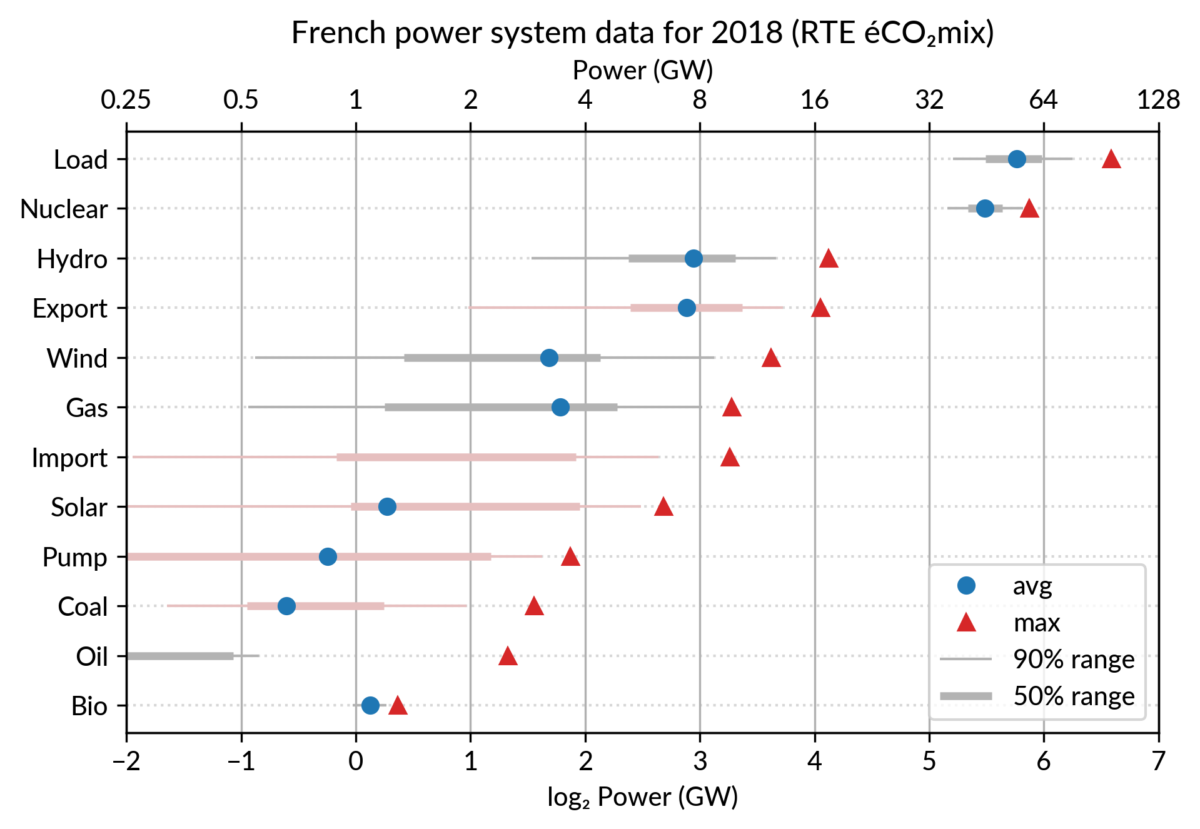 These last weeks, I’ve read William S. Cleveland book “The Elements of Graphing Data”. I had heard it’s a classical essay on data visualization. Of course, on some aspects, the book shows its age (first published in 1985), for example in the seemingly exceptional use of color on graphs. Still, most ideas are still relevant and I enjoyed the reading. Some proposed tools have become rather common, like loess curves. Others, like the many charts he proposes to compare data distributions (beyond the common histogram), are not so widespread but nevertheless interesting.

One of the proposed tools I wanted to try is the (Cleveland) dot plot. It is advertised as a replacement of pie charts and (stacked) bar charts, but with a greater visualization power. Cleveland conducted scientific experiments to assess that superiority, but it’s not detailed in the book (perhaps it is in the Cleveland & McGill 1984 paper).

The case for dot plot

Such yearly energy data is typically represented with pie charts to show the share of each category of power plants. This is RTE’s pie chart for 2018 (from the Production chapter):

However, Cleveland claims that the dot plot alternative enables more efficient reading of single point values and also easier comparison of different points together. Here is the same data shown with a simple dot plot:

Subtotals for each category are included. Gray points are either not a production (load, exports, pumped hydro) or cannot be categorized (imports).

Compared to the pie chart, we benefit from the ability to read the absolute values rather than just the shares. However, how to read those shares?

This is where the log₂ scale, also promoted by Cleveland in his book, comes into play. It serves two goals. First, like any log scale, it avoids the unreadable clustering of points around zero when plotting values with different orders of magnitude. However, Cleveland specifically advocates log₂ rather than the more common log₁₀ when the difference in orders of magnitude is small (here less than 3, with 1 to 500 TWh) because it would yield a too small number of tick marks (1, 10, 100, 1000 here) and also because log₂ aids reading ratios of two values:

Still, I guess I’m not the only one unfamiliar with this scale, so I made myself a small conversion table:

Of course, the log scale blurs the precise value of large shares. In particular, Nuclear (distant by 0.5 to the total generation) can be read to be somewhere between 65% and 80% of the total, while the exact share is 71.2%. The pie chart may seem more precise since the Nuclear part is clearly slightly less than 3/4 of the disc. However, Cleveland warns us that the angles 90°, 180° and 270° are special easy-to-read anchor values whereas most other values are in fact difficult to read. For example, how would I estimate the share of Solar in the pie chart without the “1.9%” annotation? On the log₂ scaled dot plot, only a little bit of grid line counting is necessary to estimate the distance between Solar and Total Generation to be ~5.5, so indeed about 2% (with the help of the conversion table…).

Along with the pie chart, the other classical competitor to dot plots is the bar chart. It’s actually a stronger competitor since it avoids the pitfall of the poorly readable angles of the pie chart. I (with much help from Cleveland) see three arguments for favoring dots over bars.

The weakest one may be that dots create less visual clutter. However, I see a counter-argument that bars are more familiar to most viewers, so if it were only for this, I may still prefer using bars.

The second argument is that the length of the bars would be meaningless. This argument only applies when there is no absolute meaning for the common “root” of the bars. This is the case here with the log scale. It would also be the case with a linear scale if, for some reason, the zero is not included.

The third argument is an extension of the first one (better clarity) in the case when several data points for each category must be compared. Using bars there are two options:

This brings me to the case where dot plots shine most: multiway dot plots.

The compactness of the “dot” plotting symbol (regardless of the actual shape: disc, square, triangle…) compared to bars allows superposing several data points for each category.

For the electricity data, I plot for each plant category:

The maximum power is interesting as a proxy to the power capacity. The average power is simply the previously shown yearly energy production data, divided by the duration of the year. The benefit of using the average power is that it can be superimposed on the plot with the power capacity since it has the same unit. Also, the ratio of the two is the capacity factor of the plant category, which is a third interesting information.

Since it is recommended to sort the categories by value (to ease comparisons), there are two possible plots:

The two types of sorts are slightly different (e.g. switch of Wind and Gas) and I don’t know if one is preferable.

Since I felt the superposition of the max and average data was leaving enough space, I packed 4 more numbers by adding gray lines showing the 90% and 50% range of the power distribution over the year. With these lines, the chart starts looking like a box plot, albeit pretty non-standard.

However, I faced one issue with the quantiles: some plant categories are shut down (i.e. power ≤ 0) for a significant fraction of the year:

To avoid having several quantiles clustered at zero, I chose to compute them only for the running hours (when >0). To warn the viewer, I drew those peculiar quantiles in light red rather than gray. Spending a bit more time, it would be possible to stack on the right a second dot plot showing just the shutdown times to make this more understandable.

Again trying to pack more data on the same chart, I superimposed the statistics for several years. RTE’s data is available from 2012 to 2018 (2019 is still in the making…) and the year can be encoded by the lightness of the dots.

I think it is possible to perceive interesting information from this chart (like the rise of Solar and Wind along the drop of Coal), but it may be a bit too crowded. With only two or three years (e.g. 2012-2015- 2018), it is fine though.

A better alternative may be to use an animation. I tried two solutions:

To assemble a set of PNG images (Dotplot_2012.png to Dotplot_2018.png) into a GIF animation, I used the following “incantation” of ImageMagick:

The result is nice but it is not possible to pause on a given year for a closer inspection. Using a video file format instead of GIF, pausing would be possible, but a convenient way to browse through the years would be much better.

For a true interactive plot, I’ve played with Altair, the Python package based on the Vega/Vega-Lite JavaScript libraries. It’s the second or third time I experiment with this library (all the other plots are made with Matplotlib). I find Altair appealing for its declarative programming interface and the fact it is based on a sound visualization grammar. For example, it is based on a well-defined notion of visual encoding channels: position, color, shape…

For the present task, I wanted to explore more particularly the declarative description of interactivity, a feature added in late 2017/early 2018 with the release of Vega-Lite 2.0/Altair 2.0.

Here is the result, illustrated by a screencast video before I get to know how to embed a Vega-Lite chart in WordPress:

To experience the interactivity, here is a standalone HTML page with the plot: Dotplot_Powersys_interactive.html

A quick overview of interactivity with Altair

Specifying such a user interaction with a chart starts with the description of a selection object like this:

Here fields=['year'] means that hovering one point will automatically select all the data samples having the same year.

Then, the selection object is to be appended to one or several charts (so that the selection works seamlessly across charts). This is no more than calling .add_selection(selector) on each chart.

Finally, the selection is used to conditionally set the color of plotting marks, or whatever visual encoding channel we may want to modify (size, opacity…). A condition takes a reference to the selection and two values: one for the selected case, the second when unselected. Here is, for example, the complete specification of the bottom chart which serves as a year selector:

The Vega-Lite compiler takes care of setting up all the input handling logic to make the interaction happen. A few days ago, I happen to read a Matlab blog post on creating a linked selection which operates across two scatter plots. As written in that post, “there’s a bit of setup required to link charts like this, but it really isn’t hard once you’ve learned the tricks”. This highlights that the back-office work of the Vega-Lite compiler is really admirable. Notice that doing it in Python with Matplotlib would be equally verbose, because it is not a matter of programming language but of imperative versus declarative plotting libraries.

Other discussions on dot plots

Here are the few other pages I found on Cleveland’s dot plots, one with Tableau and one with R/ggplot:

Discrepancy in the 2018 electricity statistics

I created the plots using RTE éCO₂mix hourly records to generate the yearly statistics. For a unknown reason, when I sum the powers over the year 2018, I get slightly different values compared to RTE’s official 2018 statistical report on electricity (« Bilan Électrique 2018 »). For example: Load 478 TWh vs 475.5 TWh, Wind 27.8 TWh vs 28.1 TWh… I don’t like having such unexplained differences, but at least they are small enough to be almost invisible in the plots.

Code to reproduce the plots

All the Python code which generates the plots presented here can be found in the Dotplots_Powersys.ipynb Jupyter notebook, within my french-elec2 repository.